The impact of HFSS on CPG brands

In October, the first phase of the much discussed “high in fat, salt or sugar” (HFSS) regulations came into force. While further restrictions on the sale of these goods by volume price are due to be implemented in 2023, limitations on the display and promotion of “less healthy” products by location are already in full swing.

In advance of that, I caught up with Simon and Adam to find out more about the current state of play around HFSS, and how CPGs can understand the impact of the new regulations on their trading performance.

NC: Simon, thanks very much for joining us today. You’ve obviously been tracking the HFSS rules very closely, so what are the main things that CPGs need to know?

SR: Well, HFSS is quite a broad subject, so it’s probably worth just recapping where we are and how we got here.

As I’m sure everyone already knows, at their core the HFSS regulations are designed to promote healthier behaviours amongst shoppers. With that in mind, the Department of Health and Social Care (DHSC) has used a nutrient profiling model to score every product available based on its energy, saturated fats, sugar, and sodium content. Essentially, the lower that score is, the healthier the product should be.

For those products at the upper end of that scale, the changes that came into effect in October have introduced restrictions on how they can be displayed, and the tactics that can be used to promote them.

NC: And naturally that has some major implications for manufacturers.

SR: It does, though I think there are two areas in particular that have the greatest amount of relevance from a CPG perspective.

Firstly, you have the volume price side, where offers like multi-buys, three-for-twos, and buy-one-get-one-frees have been banned on HFSS products. On paper that’s a significant change, though I think it’s fair to say that it’s been mitigated somewhat by a general phasing out of those promotions over the last few years. We also know that shoppers tend to prefer price-cut based offers on these goods anyway.

On top of that, though, you then have the changes about promotional placements. Prior to HFSS, you’d walk into a store around this time of year and find chocolates stacked up in the foyer, as well as at gondola ends and till points. That’s no longer allowed, with “red zones” having been introduced that limit the positioning of HFSS goods. Retailers have come up with a few different ways of getting around that, however.

SR: Refits, primarily. We’ve seen retailers ditching traditional gondola ends, and creating extended modular units that offer back-to-back displays for HFSS goods instead. I think it’s worth noting, though, that while these solutions are technically compliant right now, they’re probably not in keeping with the spirit of the legislation and we might see the DHSC clamp down on them next year.

What I think will stay are things like in-aisle promotional bays and aisle interrupts. It’s interesting because we’ve seen brand blocking and brand point-of-sale areas phased out over recent years, with retailers making an attempt to become more consistent in their display. Now they’re making a return as different chains work out how best to navigate around the legislation.

NC: And what kind of impact are those changes having?

SR: It’s too early to answer that comprehensively, because we’ve only been living with the legislation for a couple of months at this point. We have been tracking the impact across several of the phased trials that retailers have conducted over the past couple of years though, and the general consensus is that things haven’t changed as much as people probably assumed they would.

There has been some drop-off in affected categories, for example, but not a dramatic amount. In fact, the biggest change has been for non-affected categories, many products from which have moved up into the featurespace vacated by HFSS goods. Those have seen significant uplift, health and beauty in particular.

I think the main thing here is not to make snap judgements. If you look at the data from this Halloween, you’ll see that a third of shoppers bought less confectionery than they normally do. Is that HFSS at work, though, or is that the cost of living crisis kicking in?

What we can say, at least, is that HFSS seems to have had a broadly positive impact on availability. If there are issues there, it’s probably as a result of events on a much wider stage.

NC: It sounds like things are still a little unpredictable and uncertain, then. Adam, how does this match up with what we’ve been seeing?

AB: Yes, I think that’s totally right in terms of uncertainty. Essentially you have a lot of experimental changes taking place, which makes it difficult to predict the eventual outcome. That’s not helped by the period we’re in, either, because it can be hard to tell what’s happening as a result of HFSS and what’s down to inflation, the cost of living, the proximity to Christmas, the winter World Cup and so on. It’s tricky to quantify.

What I would say is that there’s an opportunity to look at regional breakdowns and draw some conclusions there. Tesco is unique in being the only retailer that’s applying HFSS across the whole of the UK - the rest are limiting it just to England. So within SKUtrak, you can actually compare the impact between England and the rest of the UK pre- and post-legislation, which might provide some insight.

From a promotions perspective, the difficulty here is that it’s now more difficult to forecast based on historical data, too. What happened last year is no longer a good indicator for what will happen next. Compounding that is the fact that there’s generally less feature space available, and retailers are running leaner in terms of both stock and people - so there’s a risk in terms of both availability and general oversight around promotions.

Because of all that, I think it’s becoming increasingly important for CPGs to get a really clear view of what’s happening on a moment-to-moment basis. You can’t just rely on things panning out like they did before.

NC: Okay, great - let’s wrap up there. Thanks both for your time and, Simon, thanks again for partnering with us on this. 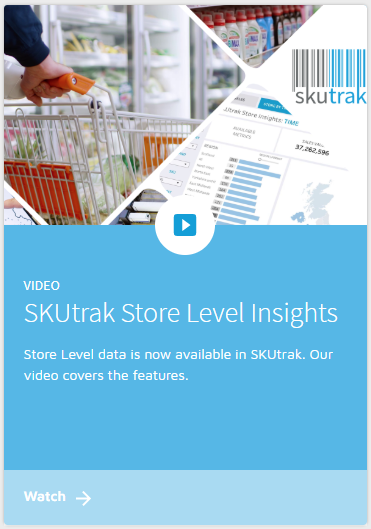